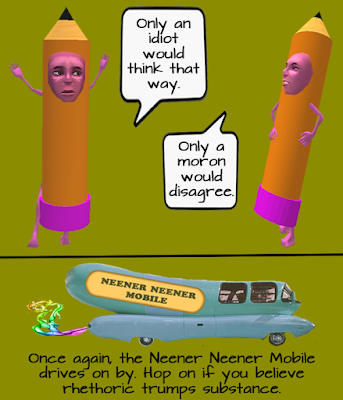 When thinking entails too much effort, becomes too difficult and requires research, it's easy to resort to rhetoric or even name-calling. This is especially true in social media that requires short responses to complex issues. The best example are election campaigns. Many people not only let others do their thinking for them, but inappropriately use rhetoric when debating substance. In politics this becomes a useful tool for building or derailing popularity through sound bites. Sadly, it works.

Another doorway onto the Neener Neener Mobile is through senseless name-calling of the individual arguing as opposed to their arguments. Even when accurate, the context can pervert the content. The result is a childish game of one-upsmanship.

A personal favorite are those who wish to have the final say by stating things like "that's it, so lets move on" or "quips like "you don't know what you're talking about" or those who end their arguments by saying "period."

If you are unable to debate a certain issue without malice, you are unable to debate that issue because you will more invested in being right than in communicating your point. Thus, you will end up taking a ride on the Neener Neener Mobile. We all do it at least every now and then, but trying to avoid it is a step forward in advancing thinking skills.
Posted by zsharon at 6:48 PM No comments: 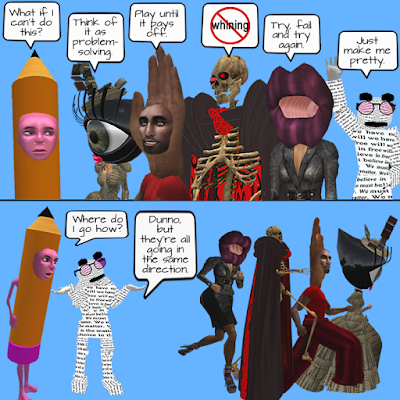 In the above comic, Penny wants to learn to think so she can write Textman. She has help from critical thinker Tikka, creative thinker Chaco, symbolic thinker Aleister and strategic thinker Miko. However, taking that first step is a doozie.

Thinking is a commitment to venturing into the unknown. Why? Because:


These are only a few reasons why the commitment to thinking is challenging. However, once you train your mind to think, thinking is automatic and a joy to behold whether you are contemplating the future, solving a problem, writing or cooking a meal.
Posted by zsharon at 6:47 PM No comments: 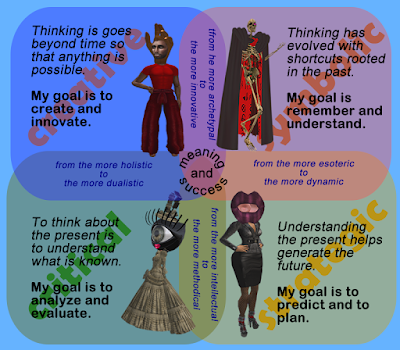 Critical thinking, check, creative thinking, sure, but what about other forms of thinking integral to success in today's world?

Symbolic thinking recognizes the shortcuts of symbols we use to understand our world. Sometimes these symbols are archetypes. Other times they are icons that have gone viral. Symbolic languages are as old as communication. The merging of the meaning of symbols exercises the thinking mind.

Learning different thinking systems is a way of expanding thinking skills.
Posted by zsharon at 3:04 PM No comments: 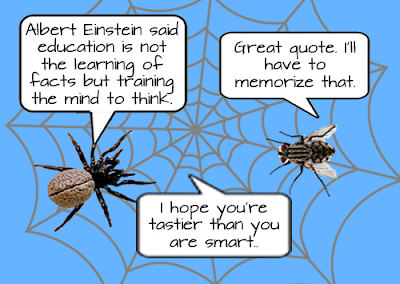 Go ahead and read all of those books on thinking and writing. Identify the behaviors involved. Learn the rules and how to break them. Quote your favorite passages. Share what you know.

But what do you know? Are you memorizing or are you learning? Are you thinking for yourself or parroting what you have read?

Thinking about thinking or even learning about thinking is an active process that requires effort if you want to do more than talk the talk. If you're ready to walk the walk, be prepared to push beyond your own limitations to originate new ideas. The ideas themselves may not be new. However, the spark of recognition from synthesizing ideas will be new for you.

Celebrate what's new about what you thought you knew.
Posted by zsharon at 6:56 PM No comments: 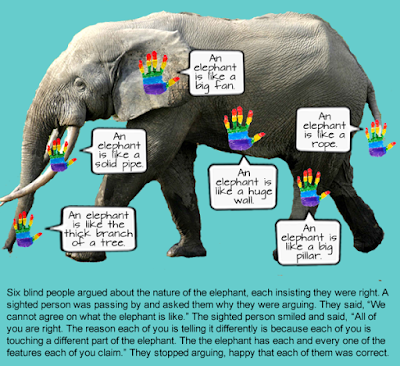 One of the rudimentary beliefs of Jain philosophy is the idea that because reality is multifaceted, it is impossible to view its entirety. No single statement or set of statements can capture the entire truth about anything described. The story above is an example.

This concept of reality vaguely resembles the western notion of the Heisenberg Principle in that the observer changes the observed.

To function in effectively, we build a consensus reality. That's not to say we don't also break our own rules to push the boundaries of thinking. However, like the wise person in the story, we are also required to understand the context.

Breaking the rules for purposes of innovation works best after you learn the rules.

Posted by zsharon at 4:58 PM No comments: 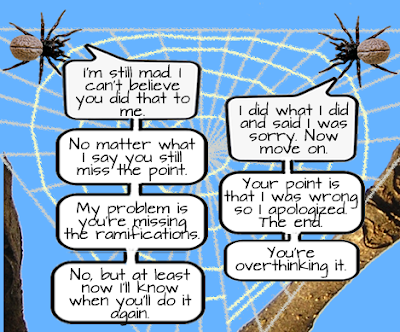 Occam's Razor isn't always sharp enough to pierce through the complexities of arguments, especially if they revolve around human interactions. Beneath the simple answers of cause and effect lies a mucky mess of ramifications, mitigating circumstances and other conditioning factors that affect attitude, feelings and sometimes even facts. Digging beneath the surface of an oversimplified argument requires empathy and emotional intelligence, along with the willingness to emotionally crumble under the weight of the errors that come with oversimplification.

The irony is that once the resistance to digging is overcome, the effect is less an emotional crumbling and more an expansion of possibilities. The feelings may be uncomfortable at first, but the new awareness serves as a payoff for the hard work of digging.

Managing the emotions behind thinking like thinking itself requires practice and training to assure you can dig deep without crumbling into an inert heap.
Posted by zsharon at 6:46 PM No comments:

Ah the left brain/right brain model of the brain. It was the rage at one time, but has since proven too simplistic to capture the brain's complexity. BUT it is an excellent thinking model nonetheless.

When given a problem to solve your impulse will likely fall into one of two categories:


These strategies resemble deductive and inductive reasoning as a means of solving a problem. The reason you choose one form of reasoning over the other comes from cultural background, early conditioning, education and your own unique way of thinking.

Your mission is to initially act on your impulse and then switch gears to use the other method to assure that your thinking is thorough, comprehensive and solves the problems from differing points of view.

Posted by zsharon at 3:22 PM No comments: 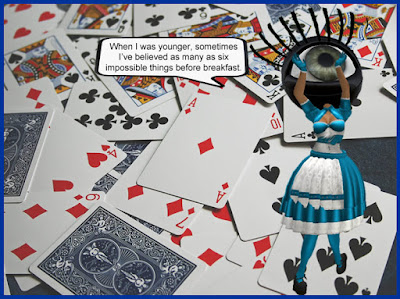 
You may be surprised by what your learn.

If you are writing fiction, this exploration will deepen your characters.
Posted by zsharon at 6:47 PM No comments: 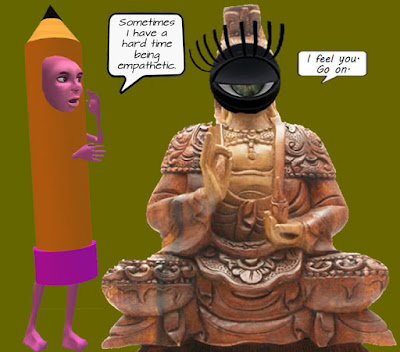 To maximize your ability to think, you are required to learn empathy Empathy is more than understanding how another thinks, you are asked to embrace the feelings behind what they think. Many try to avoid empathy because there are pitfalls:


Empathy takes practice. You learn how to balance the vulnerability that comes from sharing the thoughts and feelings of others with your ability to derive information from the experience of doing so. A few ways to practice include:


Eventually, your skills in empathy may advance to the point where you can even empathize with family members who drive you crazy!
Posted by zsharon at 4:00 PM No comments: