We disagree. We might argue, fight, yell and scream, but that doesn't mean we can't debate without beating up each other. Sadly, there are those who use emotional manipulation to "win" debates. Actually, we all do to a certain extent, even if we don't recognize it in ourselves.

Consider these emotionally manipulative tactics. How you have responded to these forms of engagement or even used them? How do you avoid internalizing the emotional triggers that make intelligent debate possible?

Juanita and Barry will debate bias in the media. They will show you 12 types of emotional manipulations and how to overcome them.

1. BLAMER SHAMER
Blamer Shamers turn compassion into guilt and caring into weakness. Their language includes words like "should," "must," "always" and "never." They will deflect responsibility by making it about you. They will instill self-doubt and chip away at your self-esteem if you disagree by exploiting your personal weaknesses and calling you crazy. They cross personal boundaries as a way of eking out power at your expense. 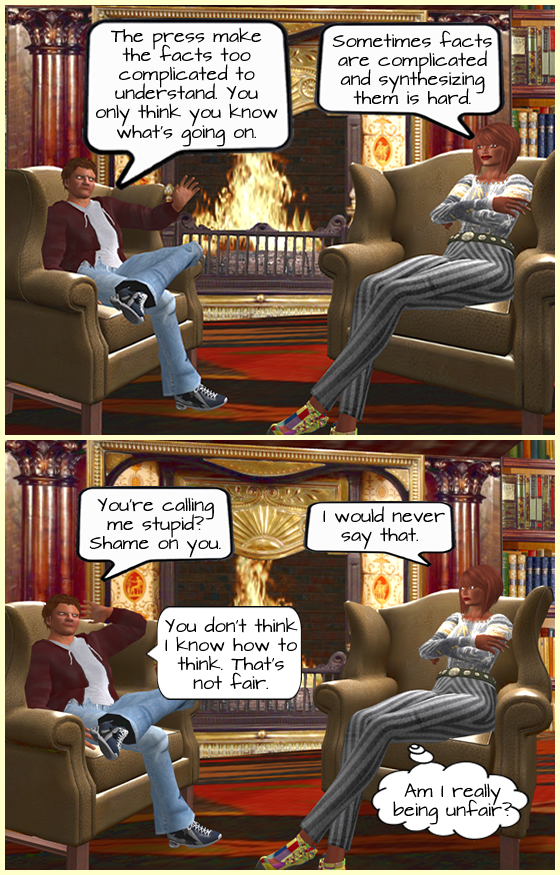 Blamer Shamers are cruel, even if that is not their intention. Avoid exposing your vulnerabilities or sharing past trauma - they will use them against you, retraumatize you if they can and blame you for being victimized. Keep strict boundaries. 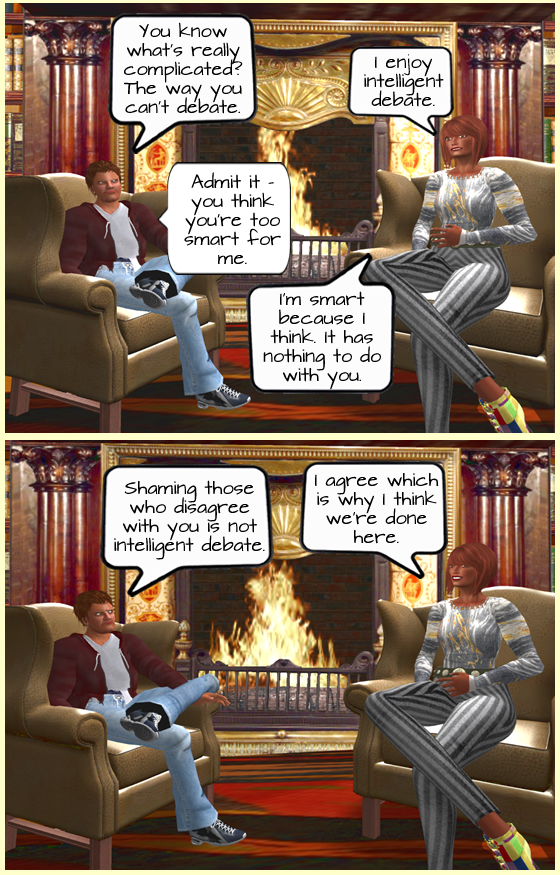 2, THE DIVERTER
Diverters use "whataboutism" to steer disagreements into another direction. They may focus on comparison rather than context or the core issue, or even reframe the entire debate as a means of gaining leverage. In this way, they can avoid accountability for poor arguments. They can also redirect the discussion by making it personal. 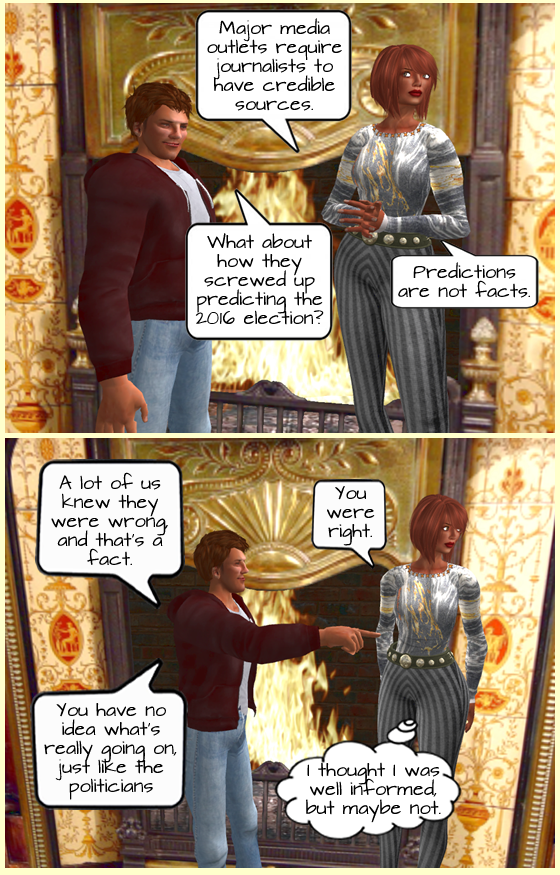 The best way to counter Diverters is to stay on topic. You may want to take the time to point out differences in the original topic and the diversion, but this could also be a trap. If they make it personal, you can point to your own experience or refuse to offer anything personal. 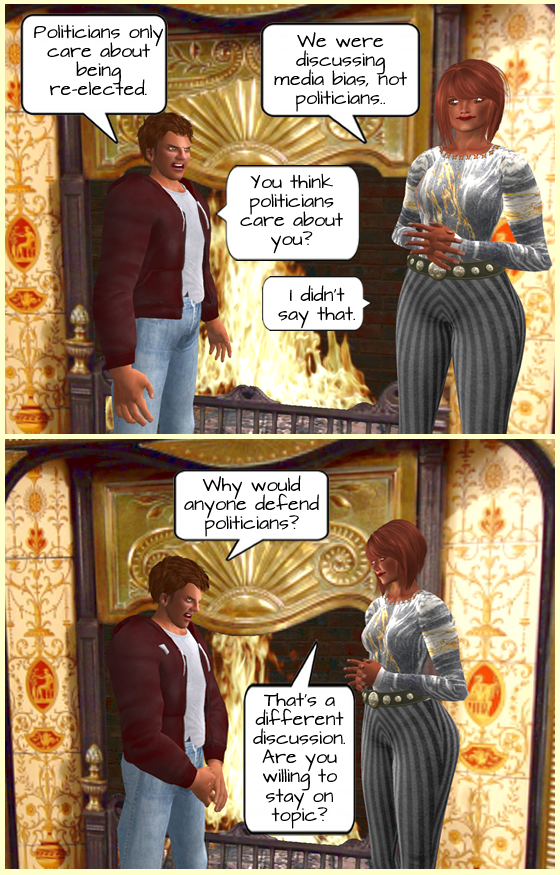 3. THE GASLIGHTER
Gaslighters twist your reality. They decide what did and did not happen regardless of evidence. During the time (in moments or longer) when cognitive dissonance kicks as you try to reconcile what you know with the alternative reality they present, they pounce, accusing you of having a wild imagination or calling you crazy. Gaslighters eat away at your ability to trust your own experience or thinking. They rely on your self-doubt to succeed. 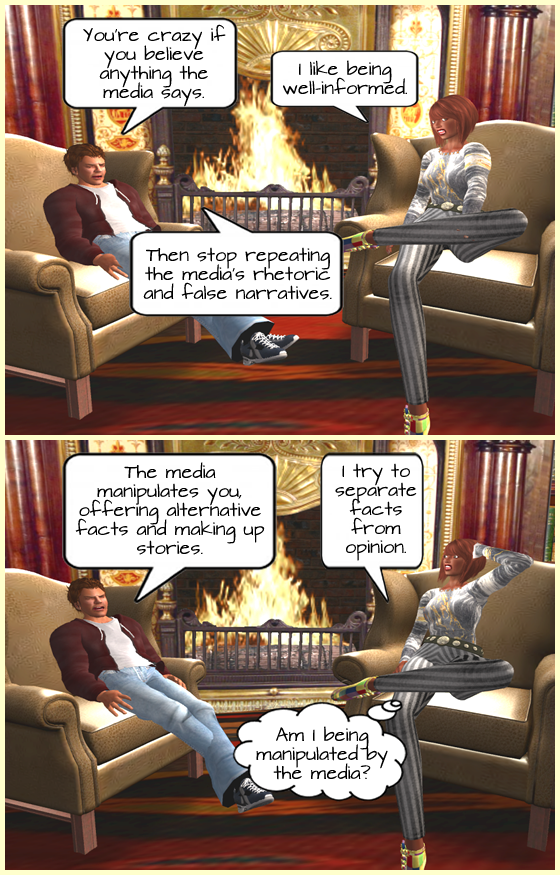 Gaslighters insidiously and with surety create a reality that serves them. They will use other forms of emotional manipulation to impose their reality onto you. Stay on topic and stick to what you know as fact. Learning through disagreement is not an option with Gaslighters. 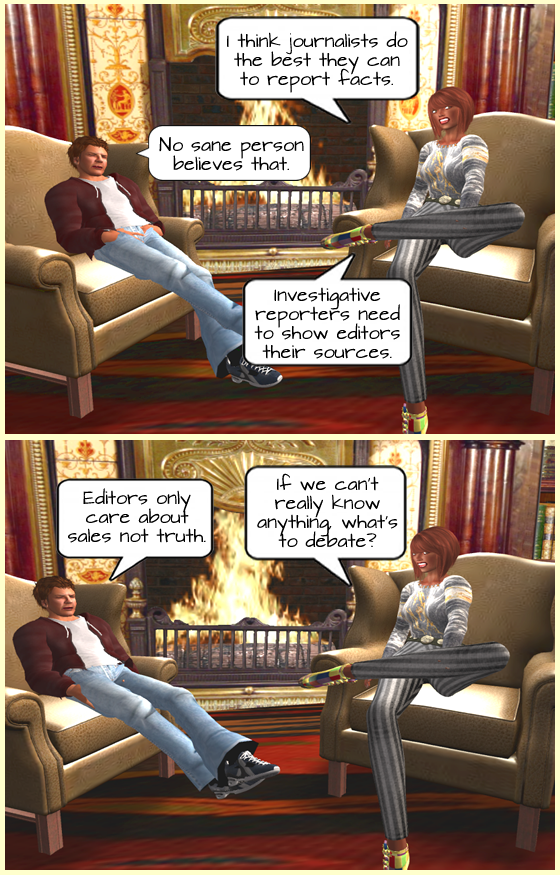 4. THE REDEFINER
Redefiners twist the meaning of words, often common words, into something nasty. They expect you to accept their definitions, often resorting to name-calling if you don't. They use misunderstanding to reinforce their superiority. They use rhetoric or memes rather than evidence to support their arguments. When threatened, they resort to name-calling to avoid the topic and attack you instead. Ask Redefiners to clarify their definitions. Use those words in your own context or simply avoid using them all together. Avoid internalizing name-calling, recognizing that such attacks are more about them than you or the topic. 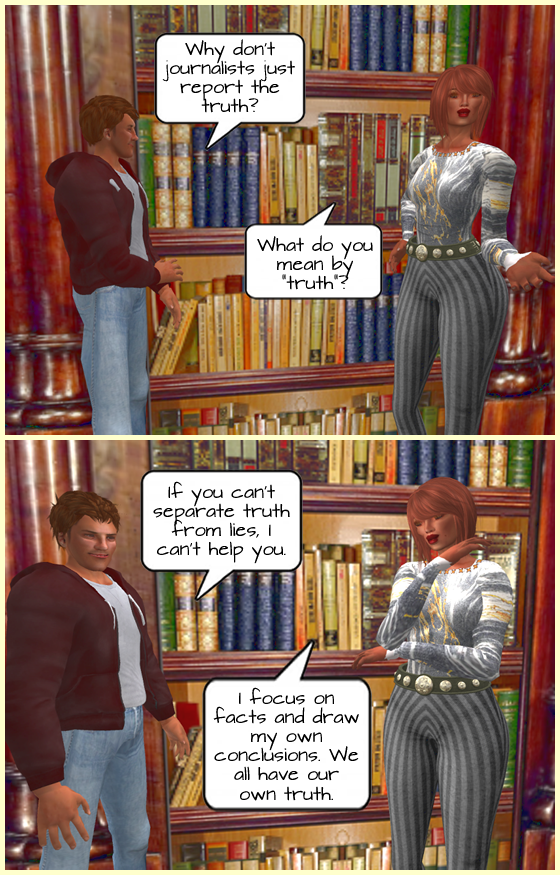 5. THE PROJECTOR
Projection is a psychological defense mechanism that is usually subconscious. Projectors protect themselves by assigning their negative actions or feelings to those who disagree. This type of manipulation is a way of refusing to take responsibility they make you responsible. You can find yourself in a defensive position in a disagreement with no resolution. Why? Projectors don't want resolution - they want to win. 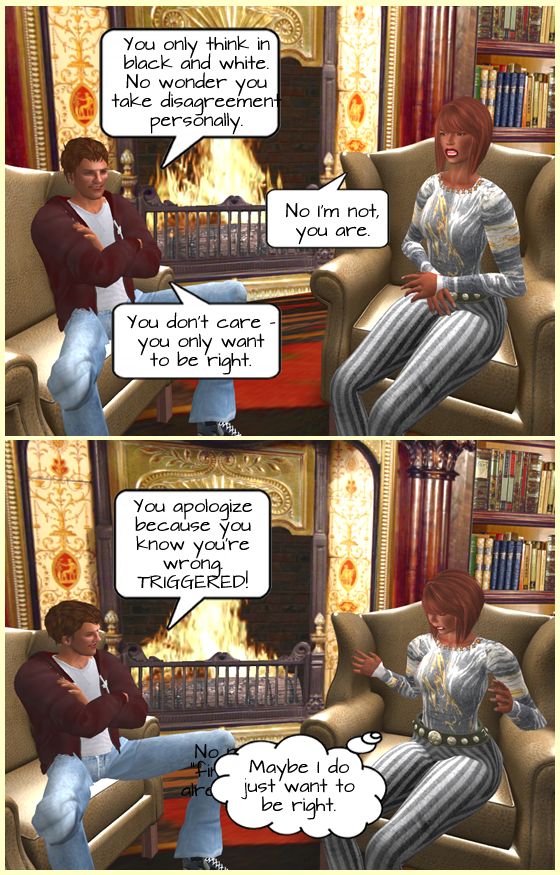 Projectors not only want to win, but they want you to lose. Sometimes changing the focus of the disagreement to allow the peaceful co-existence of opposing opinions. Regardless, use language that focuses on your argument rather than defending yourself. 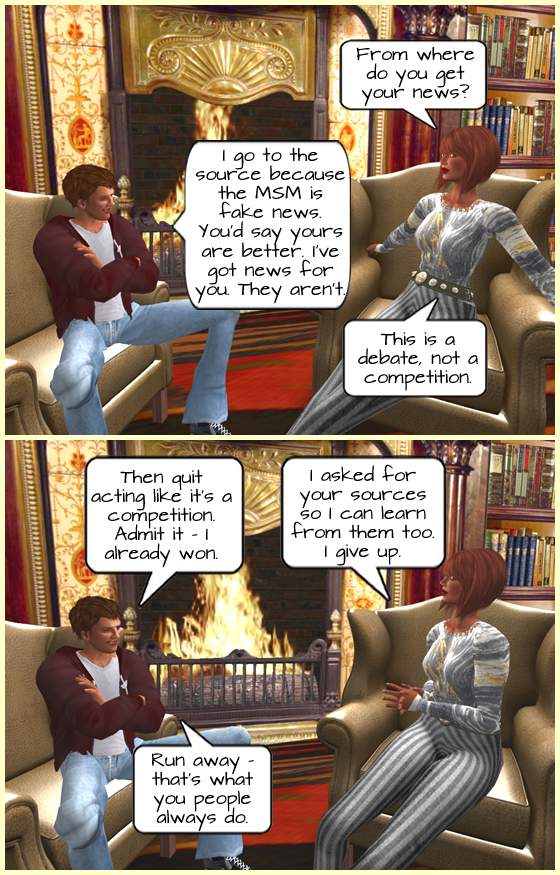 6. THE WORD SALAD TOSSER
Although Word Salad Tossers may use big words and over-simplify complicated arguments, they really only offer nonsensical arguments. When you ask them to clarify, they either call you stupid or offer more nonsense. Most often they lack abstract thinking skills and jam a bunch of words together to impress. They believe sounding smart is as good as being smart. 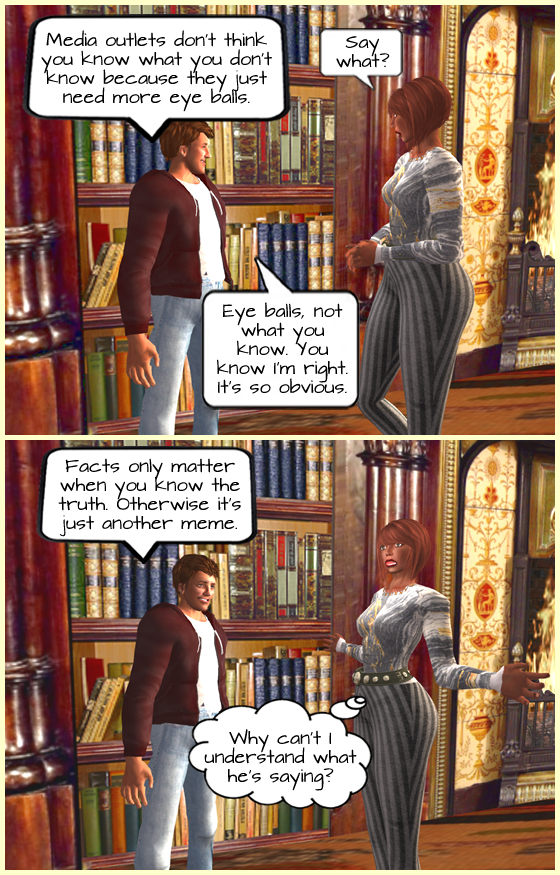 Word Salad Tossers are frustrating but can also be amusing, especially for those who love language. Eking out what they are trying to say can be challenging or even impossible. Recognize that attempts to understand them can take a discussion down the rabbit hole. 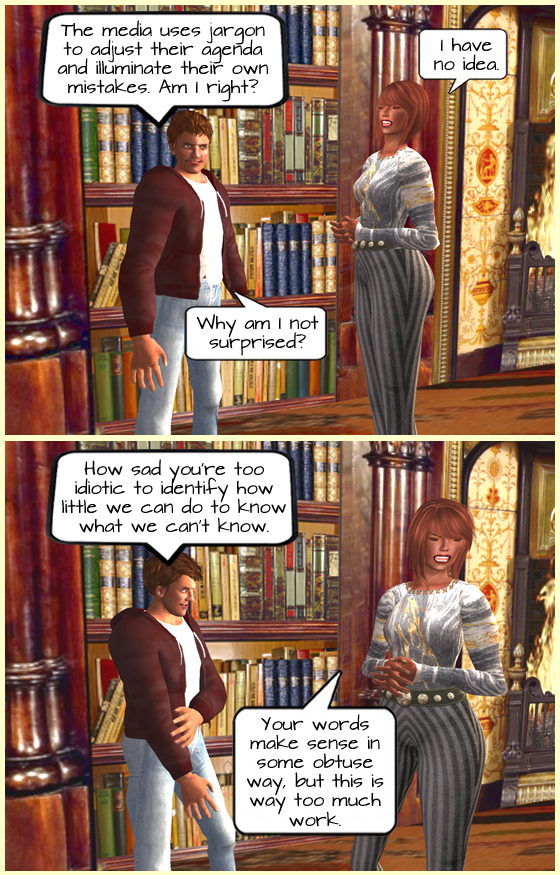 7. THE RHETORIC SPEWER
Rhetoric Spewers use memes, platitudes or quotes counter any argument. They maintain a veneer of superiority with sarcasm and treat you like a child who needs to learn. Their blanket statements ignore nuance and mitigating circumstances. 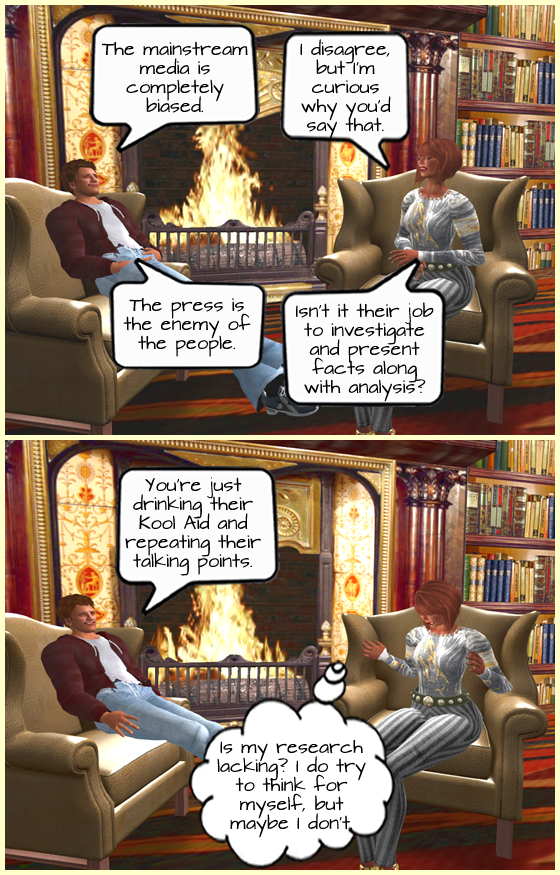 Because Rhetoric Spewers rely upon the thinking of others, ask them directly what they think and how they came to their conclusions. Point to their unsupported assumptions and focus on the topic. Force them to think for themselves - they usually can't. 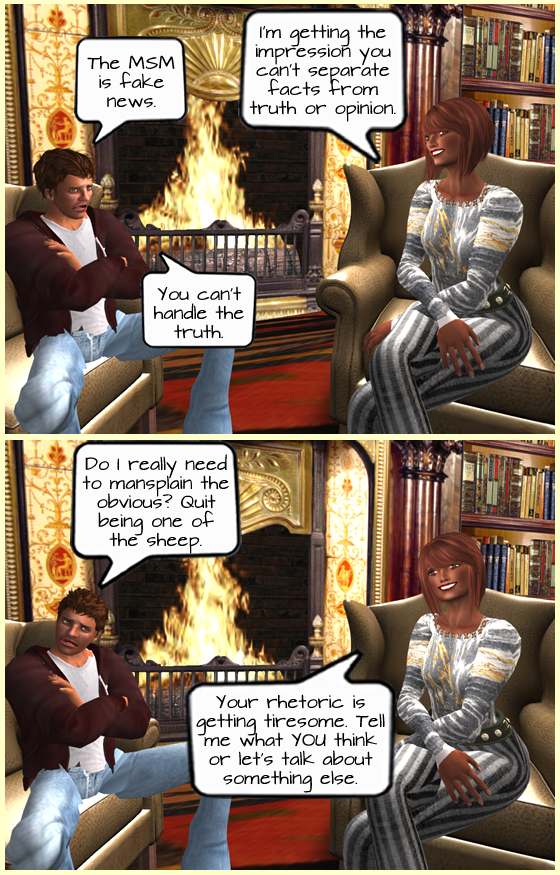 8. THE DELIBERATE IDIOT
Deliberate Idiots focus on your language use to misinterpret your arguments and relentlessly accuse you of an inability to communicate clearly. They jump to conclusions based on assumptions not only about your arguments, but about you. They will bait your with false facts or question the facts you present to refocus the discussion. They use ignorance to their advantage, using simplistic logic to discuss complex issues. 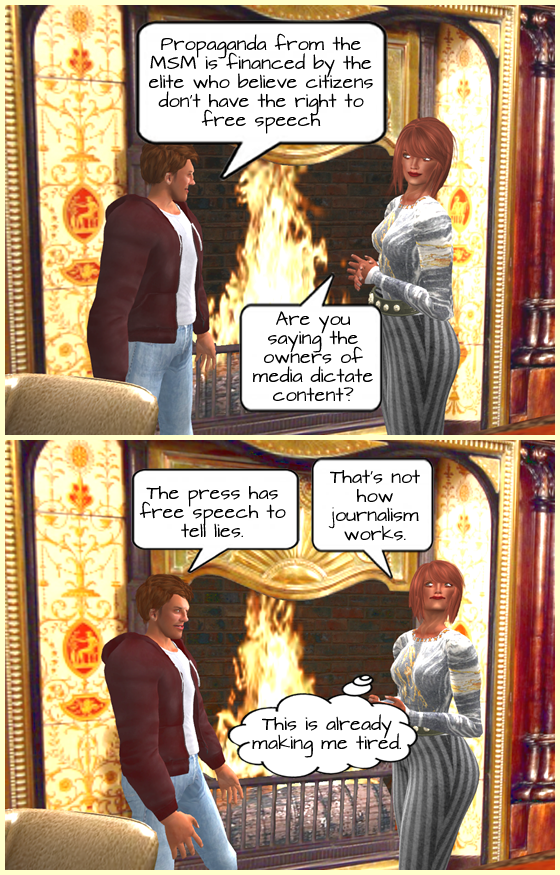 Deliberate Idiots want you to miscommunicate, so  be careful about the words you use. Find ways to agree on specific facts and point to different ways of spinning those facts. Correct them if they make false assumptions about how you came to conclusions. 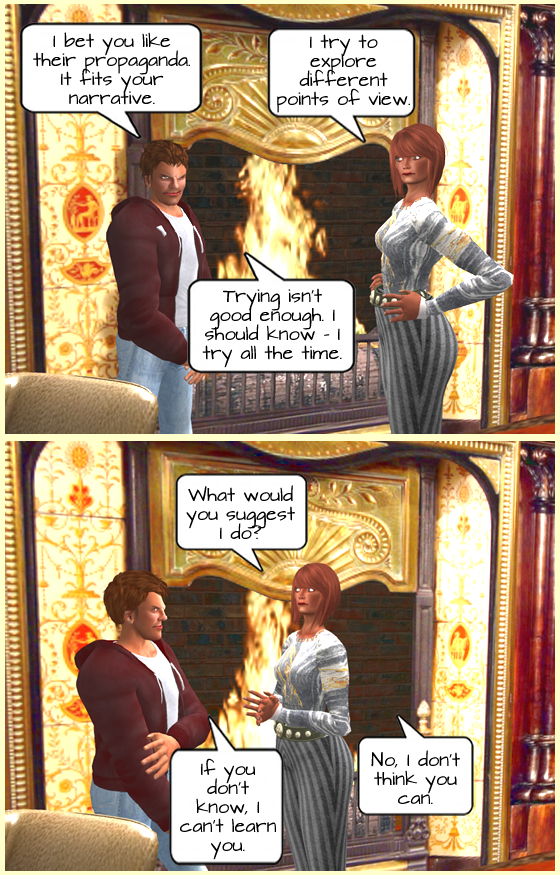 9. THE ONE UPPER
One Uppers are know-it-alls and believe they are smarter than you. Their tone is patronizing and offer pity if you disagree. Rather than listen to you, they use the time to think about what they will say next. They may offer the illusion of compassion and empathy, only to follow-up with their own dramatic stories. Everything is a competition and they are always the winner. 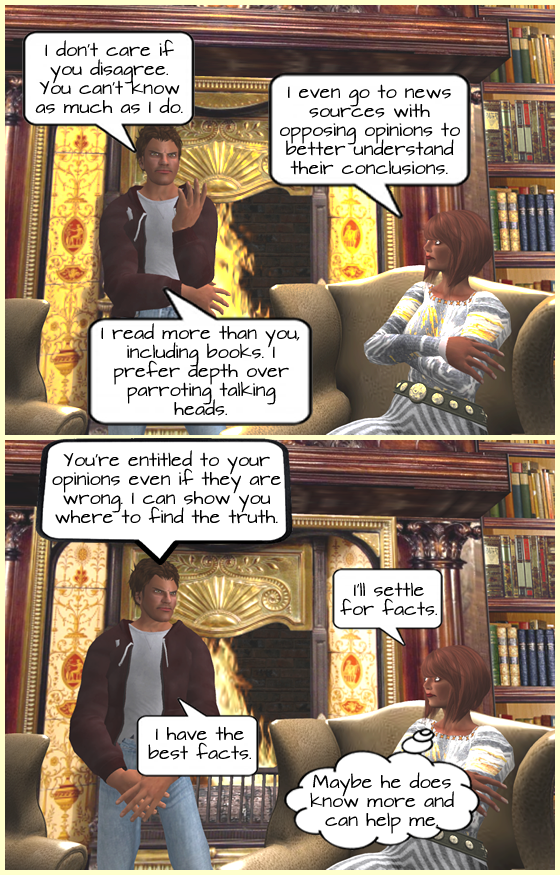 Competing with One Uppers gives them power, especially in debate. Acknowledge their experience or feelings and find ways to demand they acknowledge yours. Thank them when they do. Your goal is to maintain a level playing field even when they don't like it. 10. THE CHARMER DISARMER
Charmer Disarmers assume you want to please them. In return they use praise, flattery or flirtation to lower your defenses and trust them. They believe they will seduce you into sharing their opinions. They can be fun and playful until you figure out what they're really saying and doing. If you disagree, they pretend you're personally hurting them. 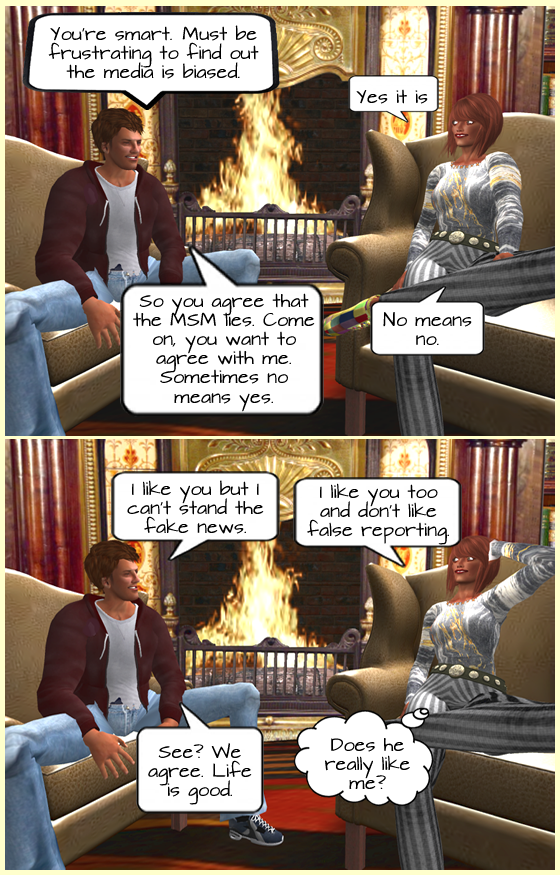 Charmer Disarmers argue their claims by making disagreement personal, eking out the pleaser in you. Debating them can be fun and seductive. Maintain emotional boundaries; otherwise they will exploit your vulnerabilities. 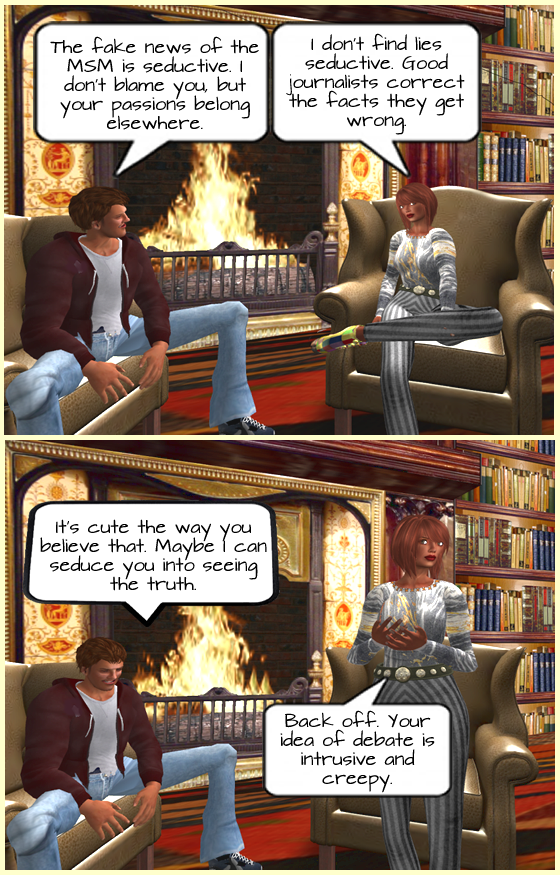 11. THE BULLY
The Bully intimidates and harasses. Why think when you can simply attack? Angry ranting is meant to intimidate. They invoke fear or trigger other reactions to put you on the defensive, pounding you with arguments laced with vitriol. Their sense of entitlement demands issues be viewed as right or wrong without mitigation. 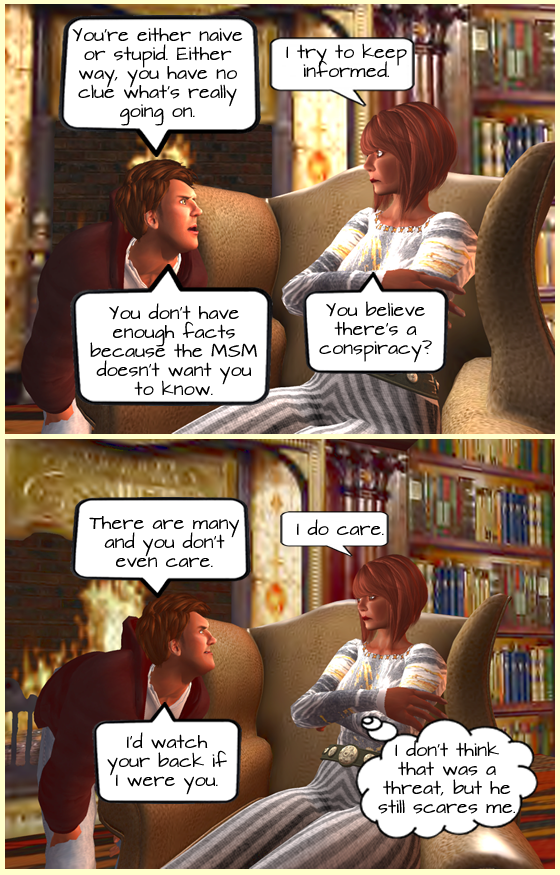 The rage of Blasting Bullies comes insecurity or fear. Engaging them on their terms only leads to fighting. Most of the time, calmly addressing facts to counter their rage redirects their unruly behavior. You can try addressing their fear, but rage from denial is even louder. 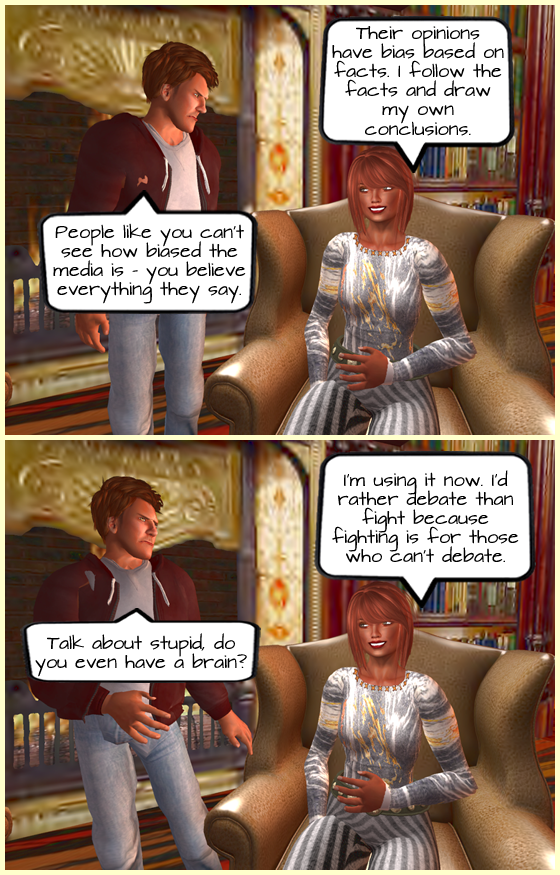 12. THE VICTIM
Victims staple the backs of their hands to their forehead (use visualization rather than thought to understand) because everything is about them. When they drag you into the black hole of their own misery, they control the debate. Using helplessness to avoid taking responsibility for what they say and do. They compete in a race to the bottom. 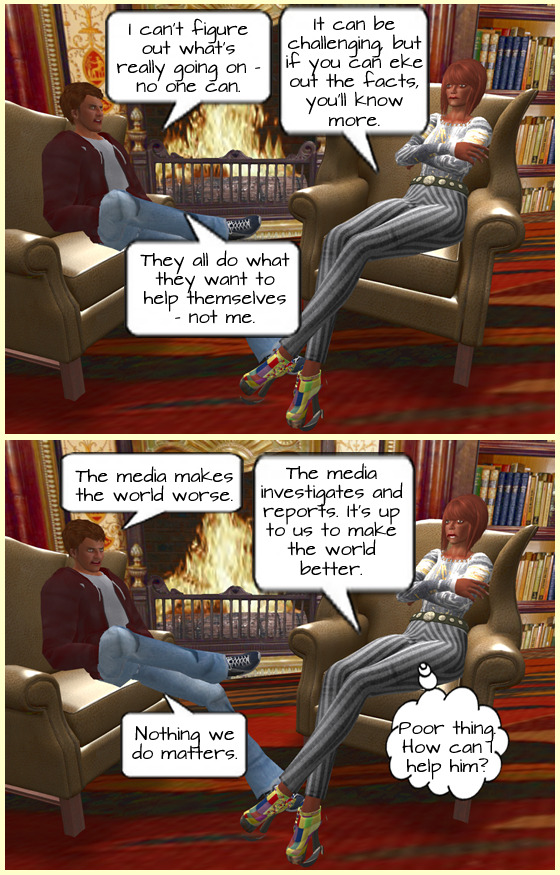 Whiny Victims won't see past their own needs. When ignored or threatened by reasonable arguments, they can turn nasty. Refuse to take the bait by arguing opinions with supported facts instead of rescuing them, reminding yourself they like being a Victim. 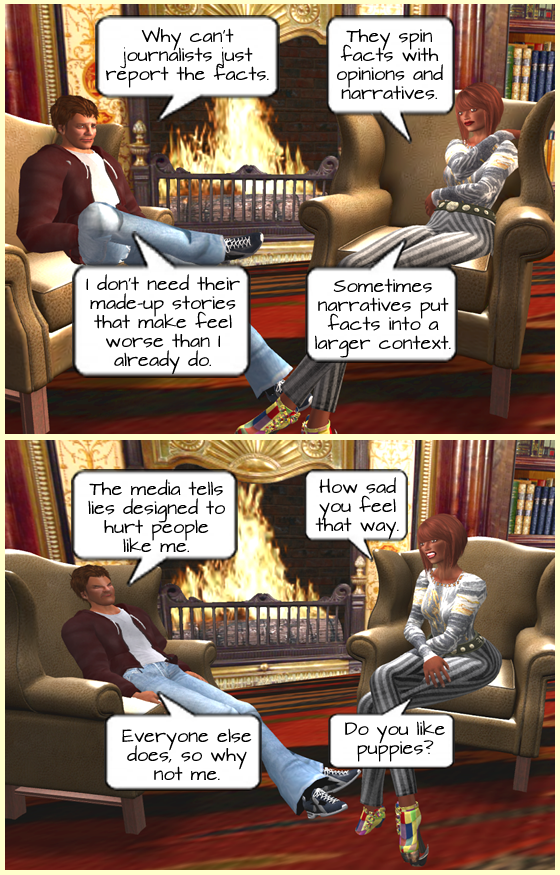 The best way to learn how to avoid emotional manipulation is to practice by engaging those you know press your buttons. The learning curve can be steep and uncomfortable, but well worth the effort.

Posted by zsharon at 5:33 PM No comments: