Recognizing fallacies in your own arguments and those of others is integral to critical thinking and writing effective essays. They are also fun to pick apart when presented as fact or supposed reasoned logic.

Currently, there are over 100 identifiable fallacies. In western thinking, Aristotle was the first to point out 13 fallacious arguments.

The reactive characters argue with fallacies. Owl comments on their arguments

FALSE CAUSE occurs when correlation or relationship also assumes cause and effect. Just because two things are related doesn't mean one caused the other. Correlation does not imply causation. 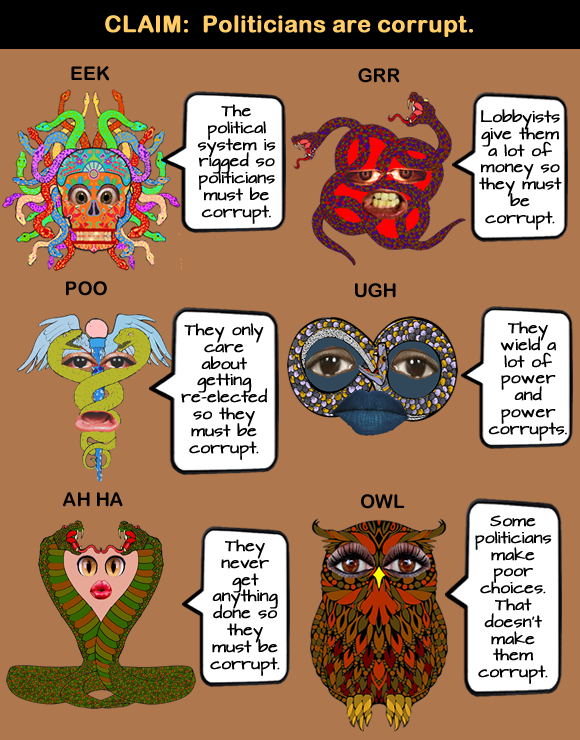 BEGGING THE QUESTION occurs when the conclusion of an argument is used as a premise of that same argument. Evidence is required to argue a claim. Circular arguments prove nothing. 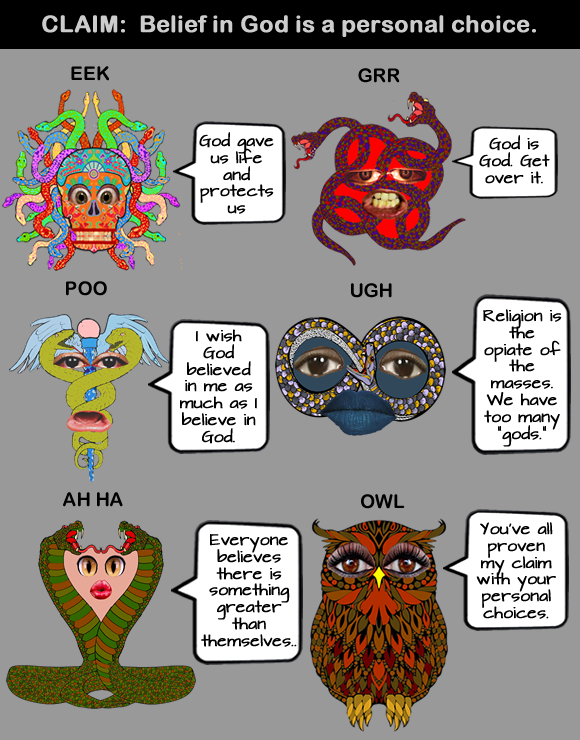 COMPLEX QUESTION occurs when a question presupposes something that has not been proven or accepted. Making up facts is easy - analyzing real facts is requires thinking. 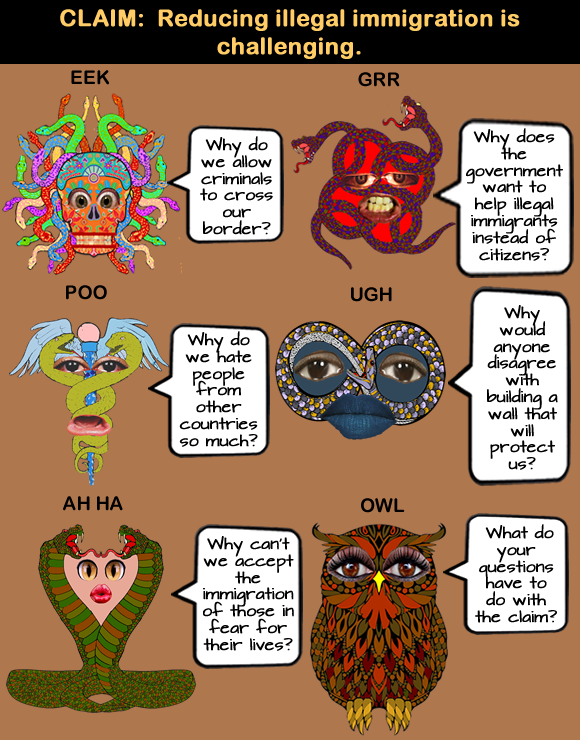 RED HERRING occurs when plausible arguments are presented but are irrelevant and diversionary. Red herrings do not exist and divert arguments. 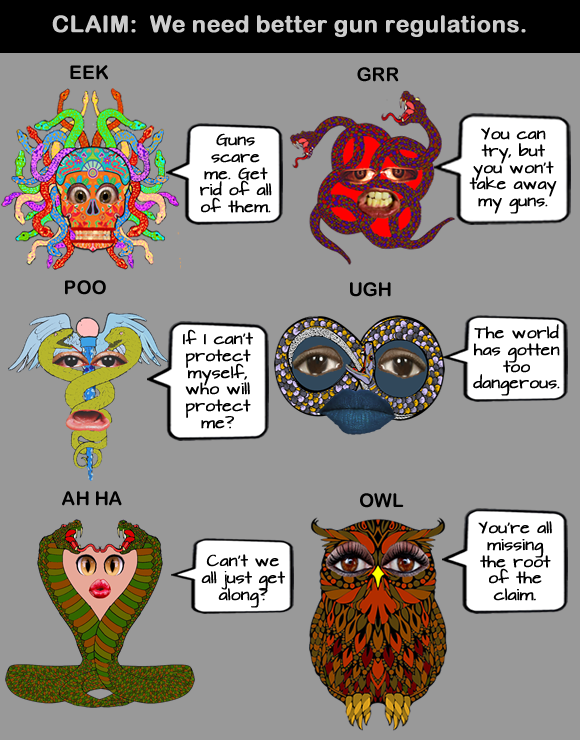 AFFIRMING THE CONSEQUENT occurs when inferring that by disproving the opposition to an argument, the argument is proven. Two wrongs do not make a right. 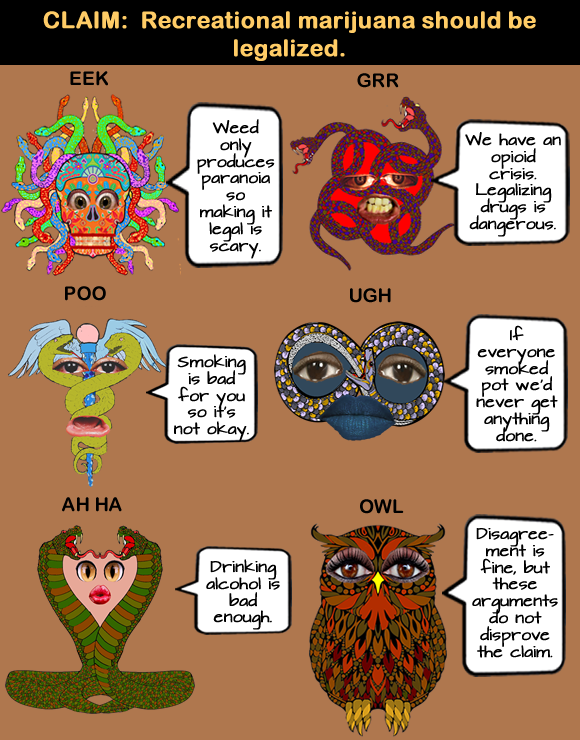 IN CERTAIN RESPECT AND SIMPLY occurs when taking an attribute bound to a certain area and applying it to a wider domain. This form of generalizing does not an argument make. 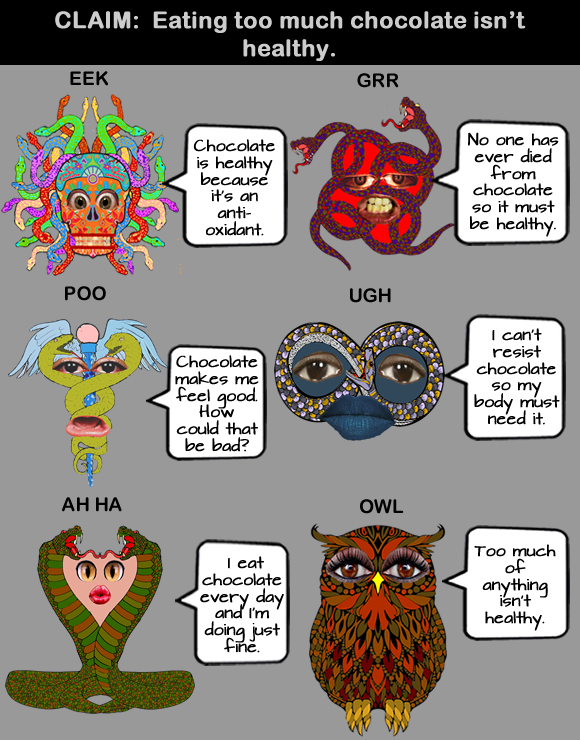 ACCIDENT occurs when generalizations ignore mitigating circumstances or exceptions. The only true absolute is change. 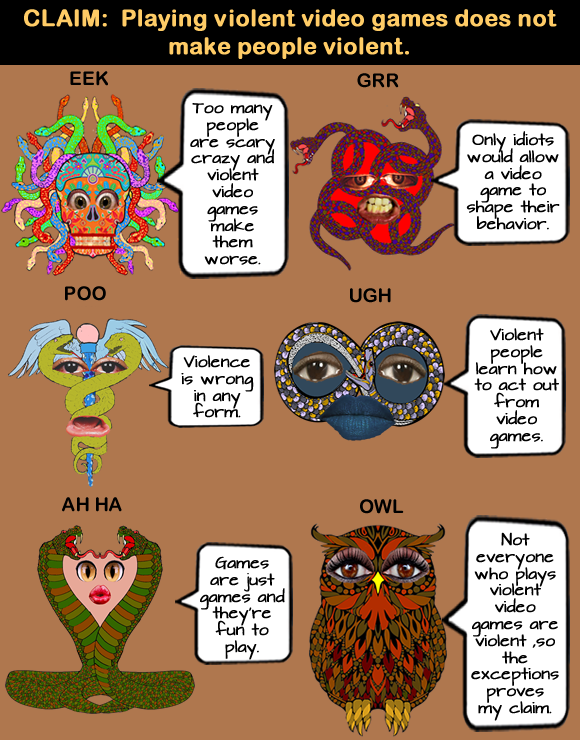 COMPOSITION occurs when the truthfulness inferred by the parts is based on the features of the whole. The whole is greater than the sum of its parts. 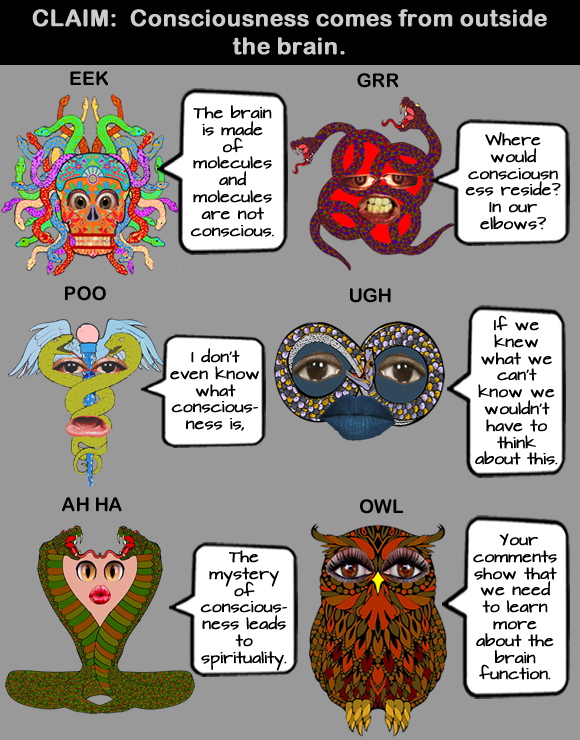 DIVISION This occurs when the truthfulness inferred by the whole is based on the features of the parts. Inductive reasoning isn't always appropriate. 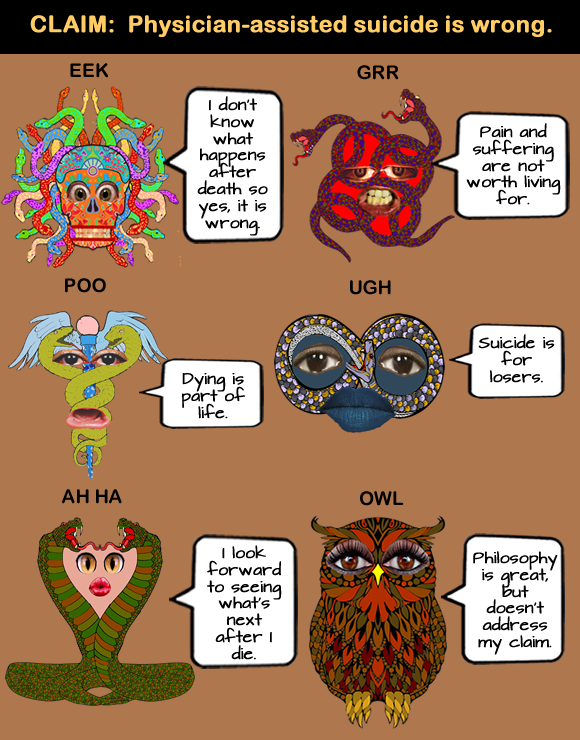 EQUIVOCATION occurs when words or phrases are given two different meanings within an argument. Misunderstanding the claim makes arguing impossible. 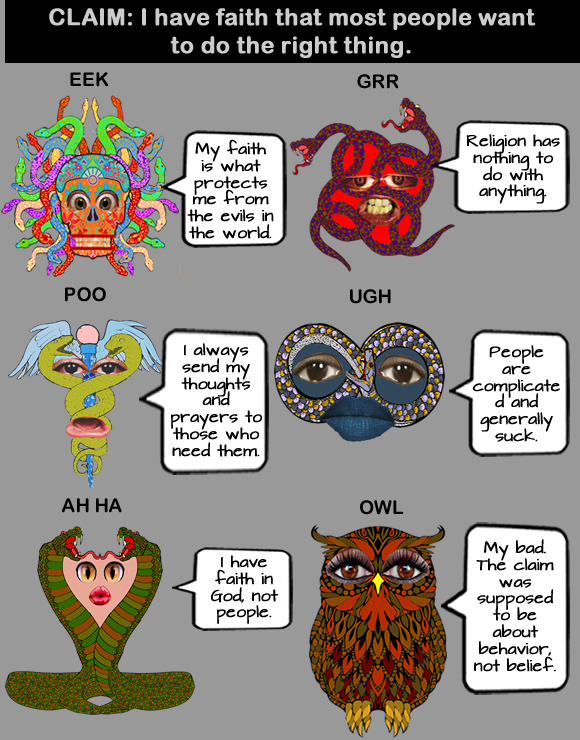 AMPHIBOLY occurs because of a misuse of grammar (or punctuation) that promotes multiple interpretations, especially in the claim itself. Syntax and punctuation matter. 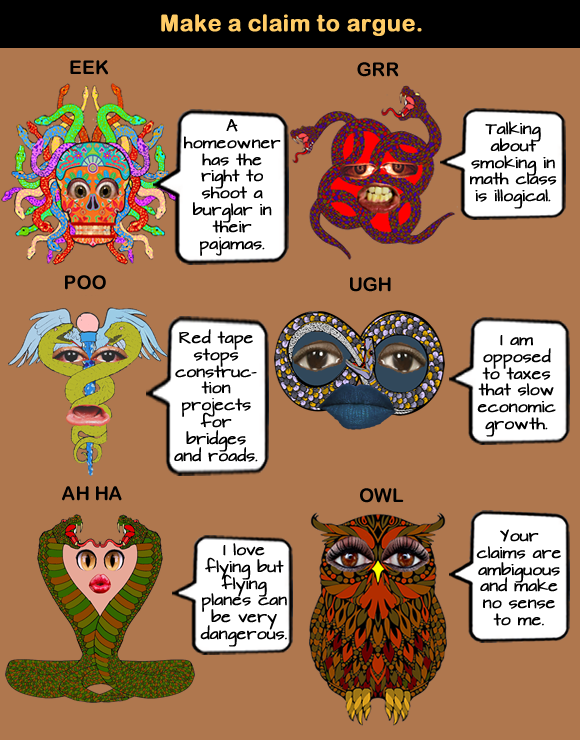 ACCENT occurs when correlation or relationship also assumes cause and effect. Just because two things are related doesn't mean one caused the other. Correlation does not imply causation. 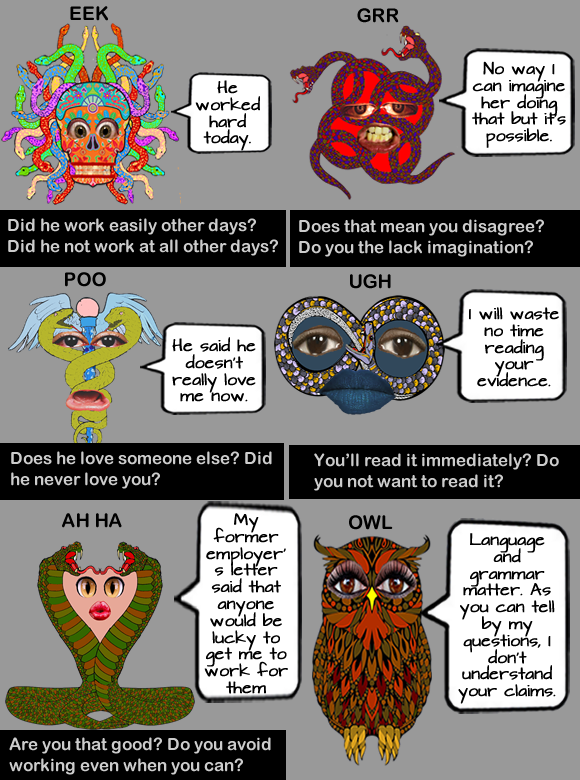 FIGURE OF SPEECH occurs when words or expressions similar in form are understood as similar in meaning. Idioms may not be your friend. 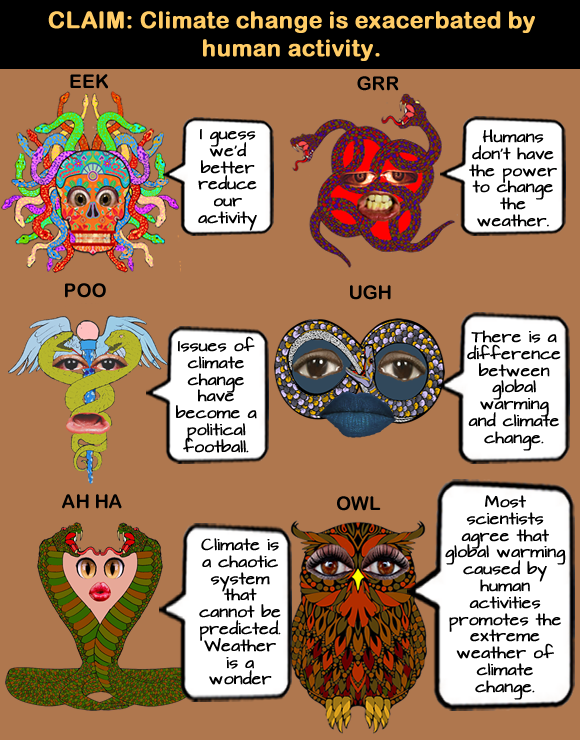 The deliberate use of fallacious arguments are popular in politics, advertising, the court room and other venues. Recognizing fallacious arguments help separate fact from opinion. (In the next installment, we will explore Jain fallacies that use a more eastern approach.)